RAW development software is responsible for creating colors when converting a RAW file to JPEG or TIFF, and the conversion method varies depending on the software.

This time, we want to introduce the outline of the image processing (RAW development) carried out in the RAW development software.

In practice, RAW development processing is performed in cameras even when only JPEG is recorded (when only JPEG images are set as the data to be saved in an SD card). In addition to digital single-lens reflex cameras and mirrorless cameras, JPEG images have been created using the same mechanism for compact digital cameras and smartphones.

What is a RAW file?

When the shutter of a digital camera is released, light (images and subjects) is first projected through the lens onto an “image sensor” (called CCD or CMOS). The image sensor converts this light into digital data (light intensity value). The information of the light captured by this image sensor is called a RAW file. 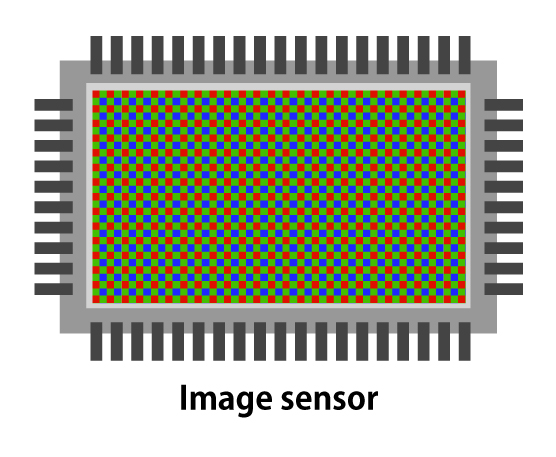 Many digital cameras can record RAW file output by the image sensor. If you have RAW development software, you can convert the RAW files to JPEG or TIFF on a PC and save them.

By using the CPU of a PC with higher performance than the image processing circuits inside cameras, advanced image processing technology and the latest image processing technology can be applied to RAW files, so high-quality photographs can be obtained. In addition, RAW image files are 12 to 16bit or more data, which has more information than JPEG data, so there is almost no deterioration in image quality when the photograph is adjusted with the RAW development software, and it is possible to finish the photograph as it is in the image while maintaining the image quality at the time of the shooting.

What is image processing in RAW development?

Imaging devices (image sensors such as CCD and CMOS) installed in most digital cameras today have a construction called a Bayer arrangement to obtain color images. 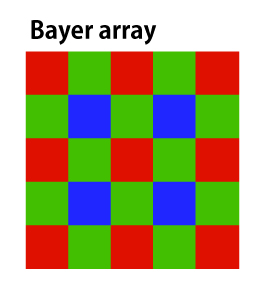 In the Bayer array, Red, Green, and Blue color filters are placed on each pixel on a sensor. Pixels that receive only the information of each color are arranged like a checkerboard pattern. It is recorded as a RAW file. As a result, each pixel has only one RGB color information when the RAW file is left unchanged, so it cannot be viewed as a color image.

Demosaicing refers to the image of a RAW file by referring to the pixel information of RGB adjacent to each pixel and performing the complementary processing. As shown in the figure below, to create a full color of one image, at least four images of information are required. For example, if the camera is 50 million pixels, this process is repeated 50 million times. 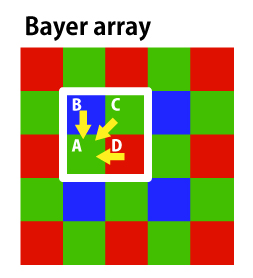 In the example below, the same RAW file is developed by SILKYPIX and RAW development software A of other companies respectively.

In this way, the resolution of the same RAW file differs depending on the demosaicing process. To compensate for the resolution feeling as a reference, the following image is obtained by applying sharpness to the image of RAW development software A. 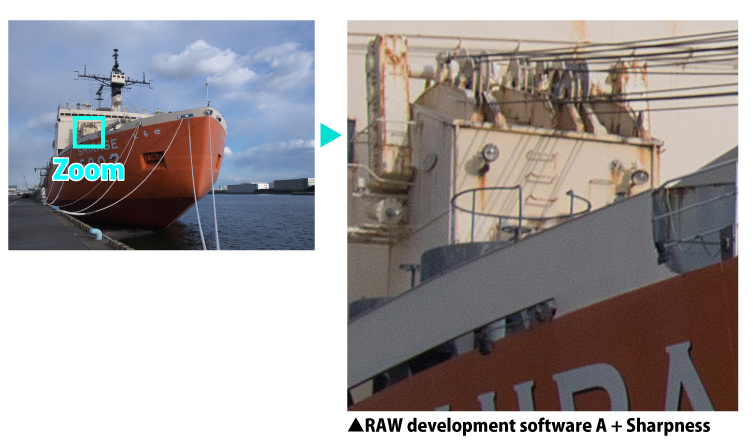 The image is obvious, but there is more cluttered noise and an unnatural border between color and color. As you can see, the sharpening process has side effects, so it is advisable to use it as minimally as necessary. The performance of the image processing engine is important for enhancing the resolution while maintaining high image quality.

The most noticeable color characteristics of the RAW development software’s image processing engine are the so-called bright and vivid areas, such as highlights and high saturation areas. 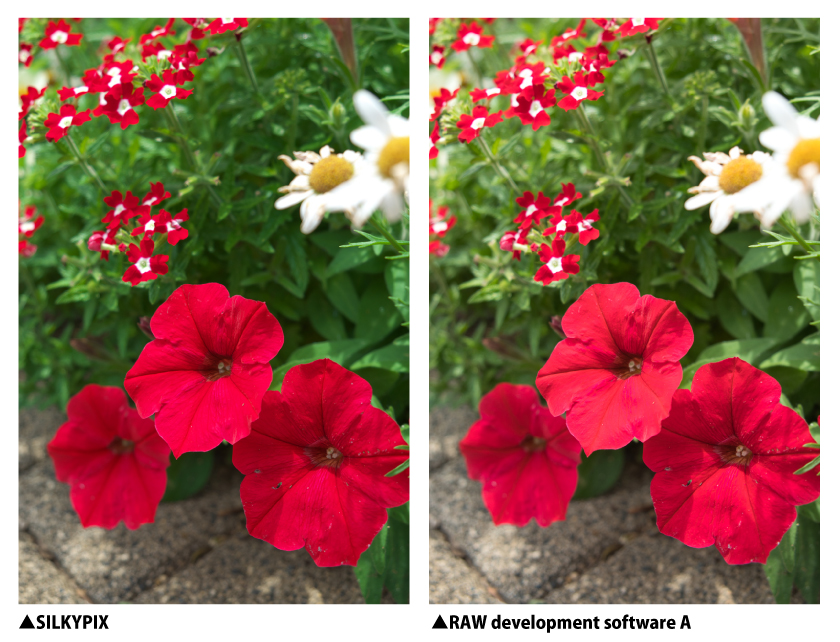 As described above, the demosaicing multiplies the RGB data in the Bayer array to create a full-color image. Therefore, the correct color may not be reproduced in the following cases.

If you brighten data with a large red value in this way, only red reaches the maximum RGB value of 255, and you will not be able to increase the value anymore. In this case, the color balance between the other colors (green and blue) may be lost, causing a changing the hue. This red is saturated color.

Each company that develops RAW development software uses the rich information of RAW files to improve the reproducibility of this color-saturated part. This makes it easier for performance and characteristics to appear in highlighted areas.

Finally, the flow of RAW development is as follows: