There are several types of image files. We think you are selecting the file format that suits your purpose from among the image file types and using it.

This chapter provides an overview of the image files that are often used when editing photos.

“.JPEG” or “.JPG” is an image data compression method commonly used in digital cameras, smartphones, and other devices. JPEG is an abbreviation of the name “Joint Photographic Experts Group” of the organization that established the compression standard and is used as the extension name.

However, because lossy compression causes JPEG to truncate some of the data during compression, it cannot be undone once it is compressed. JPEG compression separates the images with a square of 8*8 pixels and replaces the blocks with similar colors. Because data is skipped at that time, if it is compressed too much, the color is uniformized in blocks and the image becomes mosaic-like. However, since the mosaic is hardly noticeable when the compression ratio is increased, it is also used as a storage format for high-definition photography, such as digital cameras.

You need to be aware of this when editing JPEG images with photo retouching software, etc. If JPEG images are overwritten and saved repeatedly, they will be compressed again, and the image quality will be degraded each time. Therefore, this format is not suitable for image editing.

The image below is saved several times by photo retouch software.

Due to poor image quality, the edges of the logo are blurred, resulting in mosaic-like noise. If you want to perform image editing with as little image degradation as possible, we recommend the “TIFF” and “RAW” files described below.

“.TIFF” or “.TIF” is a highly versatile file format that can be viewed and edited by many operating systems and applications. It is often used for high-definition print data because it can be stored even in uncompressed format. The amount of data per pixel can also be selected to suit your purpose such as 8-bit or 16-bit. However, the file size increases.

TIFF is an abbreviation of “Tagged Image File Format” in which “tags” describing image information are recorded on a part of the image data. Any application that opens a TIFF file will use and display that information, resulting in excellent image reproduction.

However, it is a file format that cannot be displayed on websites or social networking sites, so you must convert it to a JPEG when using it on the Internet. In addition to being uncompressed when saving, TIFF allows you to choose any compression method, such as LZW, ZIP, or JPEG.

The example of saving options in a photo retouching software

Note that while “LZW” and “ZIP” are lossless compressed (data will not be degraded when saved), “JPEG” will degrade the image quality when saved. (In general, no compression is often used.)

Since TIFF files do not degrade the image quality even if they are overwritten, they are often used as original data for image editing. However, there are very few digital cameras that can be recorded in TIFF file format, so you need to convert the RAW file introduced below to TIFF.

RAW files are file formats that can be recorded by digital single-lens reflex cameras or some compact digital cameras.

Unlike the two general-purpose formats described above, these formats are dedicated to different digital camera manufacturers and models. As a result, the file name extensions vary depending on the camera manufacturer, and cannot be displayed as an image in the OS standard application or image editing software that does not support RAW files. To display a RAW file as an image, a “RAW development software” supported the RAW file is required.

The RAW file extensions of typical camera manufacturers are as follows.

If you select JPEG + RAW or RAW recording in the camera settings, you can save the RAW file when shooting.

RAW file has the extension “.NEF.”

In this example, the RAW file was opened in the general-purpose RAW development software SILKYPIX series.

Multiple RAW files can be displayed and edited by using the general-purpose RAW development software even if you are using cameras from multiple manufacturers. See here for detail of the SILKYPIX series.

What is the role of RAW development software?

The RAW development software is able to convert RAW files into general-purpose data such as JPEG and TIFF. You can adjust the Exposure, color, tilt, cropping, noise, sharpening, and other details of the photograph, as well as correct lens distortion. 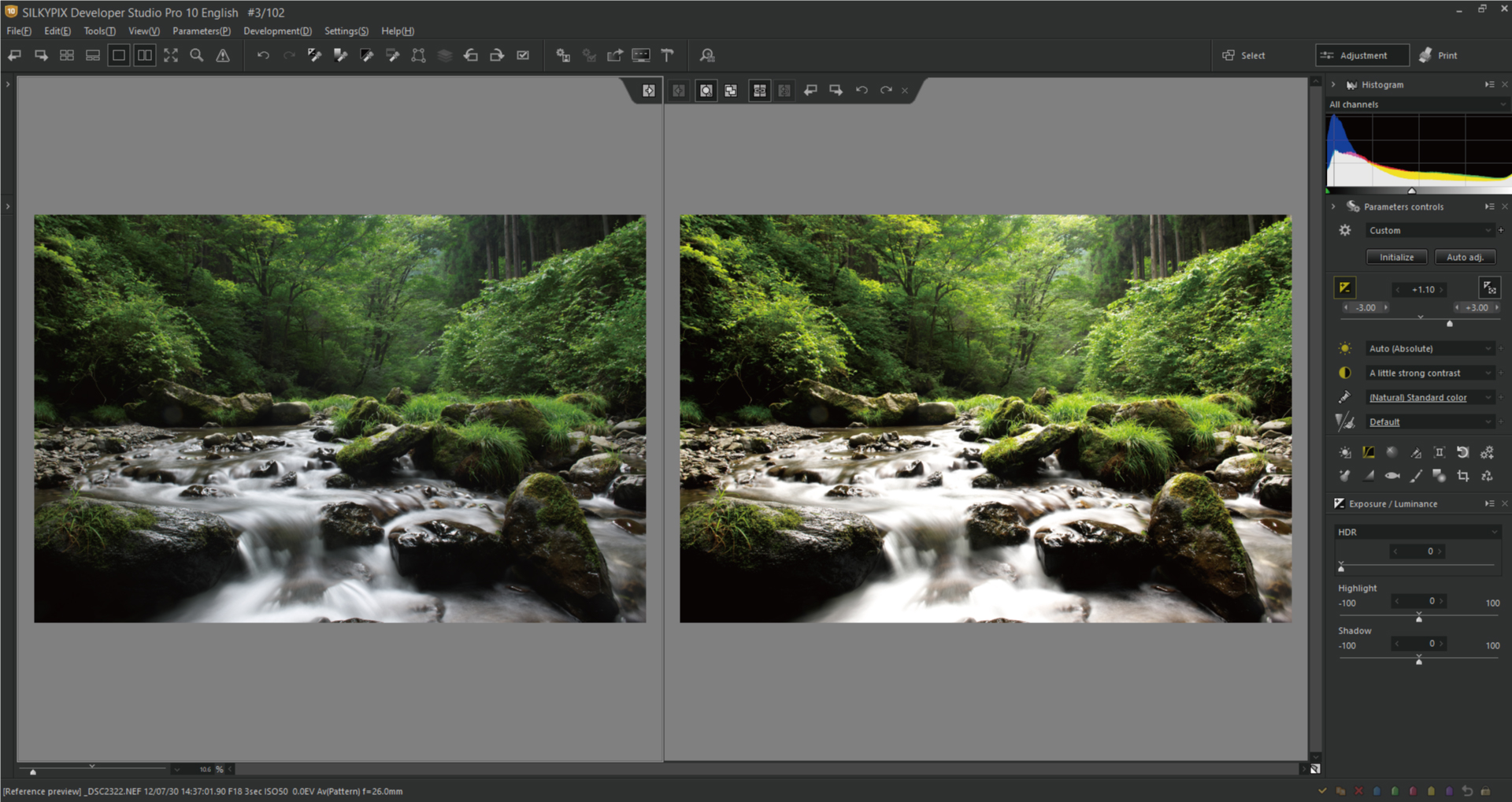 Since editing images in JPEG will degrade the image quality, it is recommended that RAW files be processed when editing images. If you have cameras such as digital single-lens reflex cameras or some compact digital cameras, please try them out. See here for detail about quality degradation when editing JPEG images.