This time, we will introduce you to the “gradation” of digital photos.

We’ll tell you beforehand that in digital images, the term “gradation” is not a gradation representing a continuous color, but a “number of colors” in which colors and colors change intermittently. Therefore, in this article, the gradient representation based on the number of colors is called “gradation.”

What is a bit? 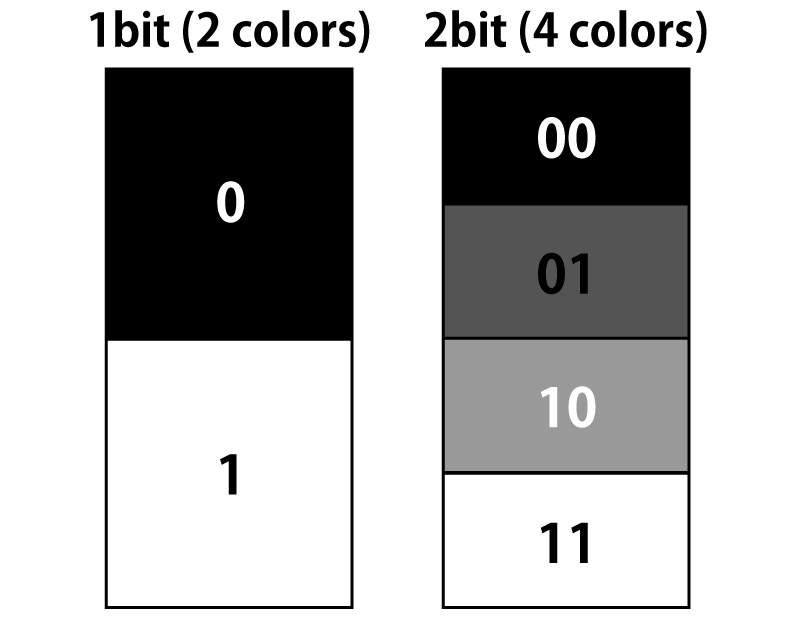 Bit and information quantity (number of colors that can be represented)

The “JPEG” data, which you use to shoot with digital cameras, upload to the Internet, and print, has RGB (red, green, blue) information. Each color information is 8-bit (8-bit = 2 to the power of 8), so it has 256 colors. The 256 colors are multiplied to reproduce the full color.

Since this color image has 8-bit information for each RGB channel, it is sometimes referred to as an “8-bit/channel image” or “24-bit image” by adding the number of bits of each color.

Is the amount of information of 8-bit data large? Or Small? 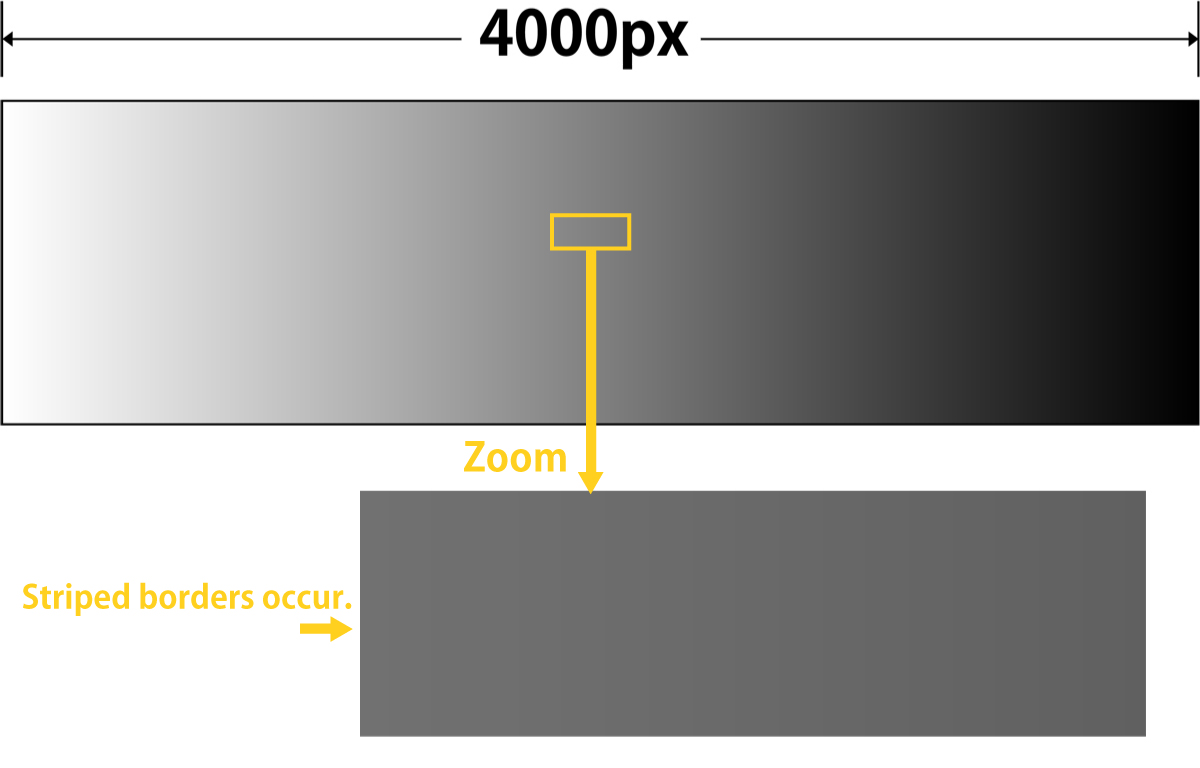 Let’s say you’ve taken a photograph of a subject that has a gradient from white to black.

If you shoot with a camera with a pixel count of 4000 pixels on the long side, the 8-bit digital image represents only 256 monochrome colors, so the width of one color is 4000px/256 colors = approximately 16px.

This results in a so-called “stepped gradient” in which the colors change in a band approximately every 16 pixels. As a result, colors and colors may have borders and appear striped.

When an 8-bit image is edited 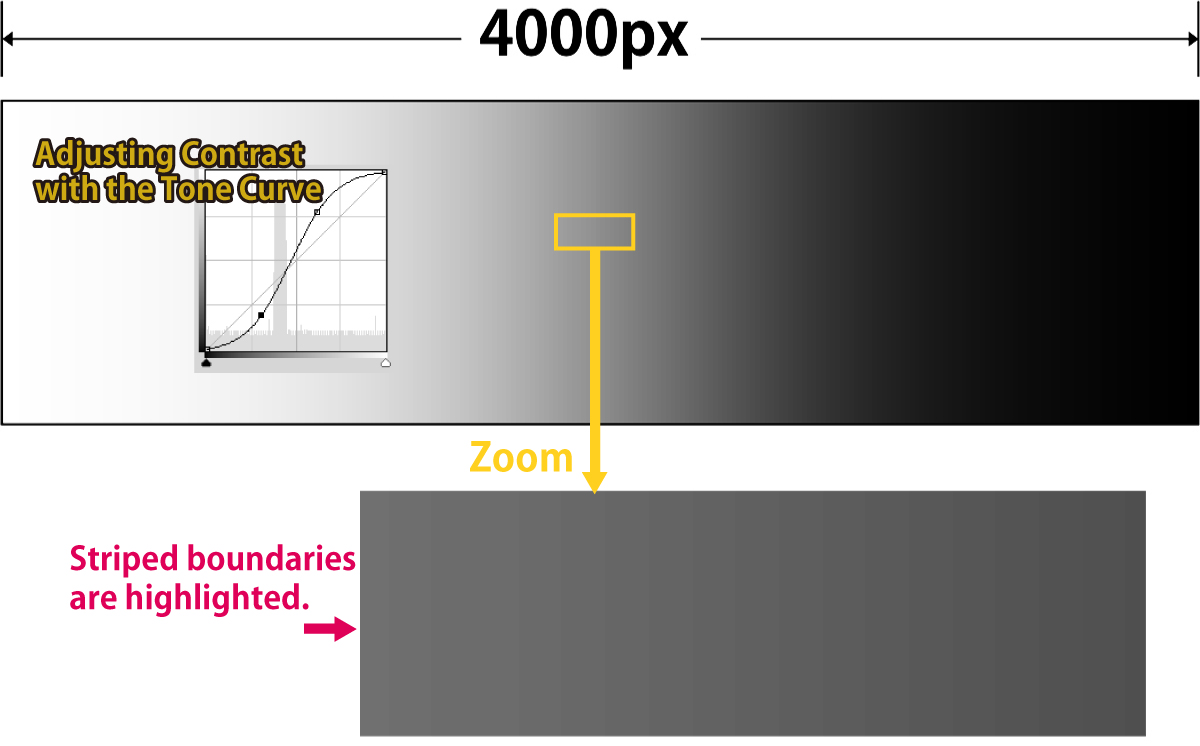 If you use a tone curve or other method to edit an 8-bit image as described above and change the ratio of light and dark, the original striped borders may become more intense and the connection between color and color may appear worse.

When an RGB image is edited 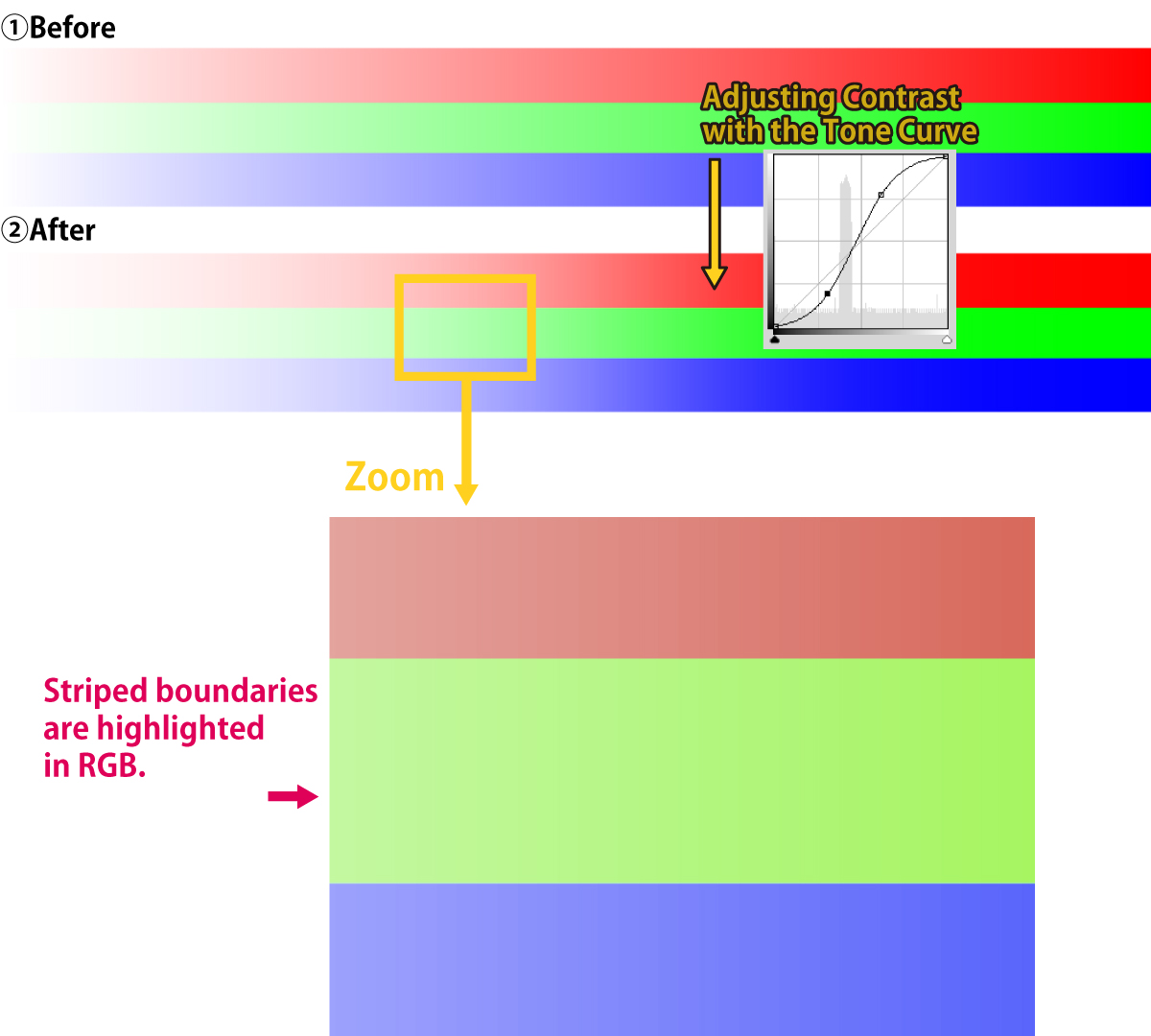 Since each color is 256 colors even in the RGB solid color gradient, striped borders may become noticeable as in monochrome when editing images. In conclusion, the connection of the gradient will become poor, so 8-bit images are “viewing” data that does not assume adjustment and are not suitable for “image editing” data.

Deterioration in image quality due to editing of JPEG images

Editing 8-bit JPEG images with photo retouching software will result in poor image quality. The degradation of image quality is more pronounced when it comes to color connections (gradations). Now let’s compare the pre-adjustment and post-adjustment images by decomposing them into RGB channels.

The above image is before adjustment. Gradient connections are good, but the dark contrast is low, so we try editing the image with brighter and higher contrast as shown in the image below.

The image is now bright and vivid, but at the cost of a tone jump is occurring in the empty gradient of (1). Looking at the RGB channel, you can see noticeably a breakdown in tone, mainly on the red and blue channels. 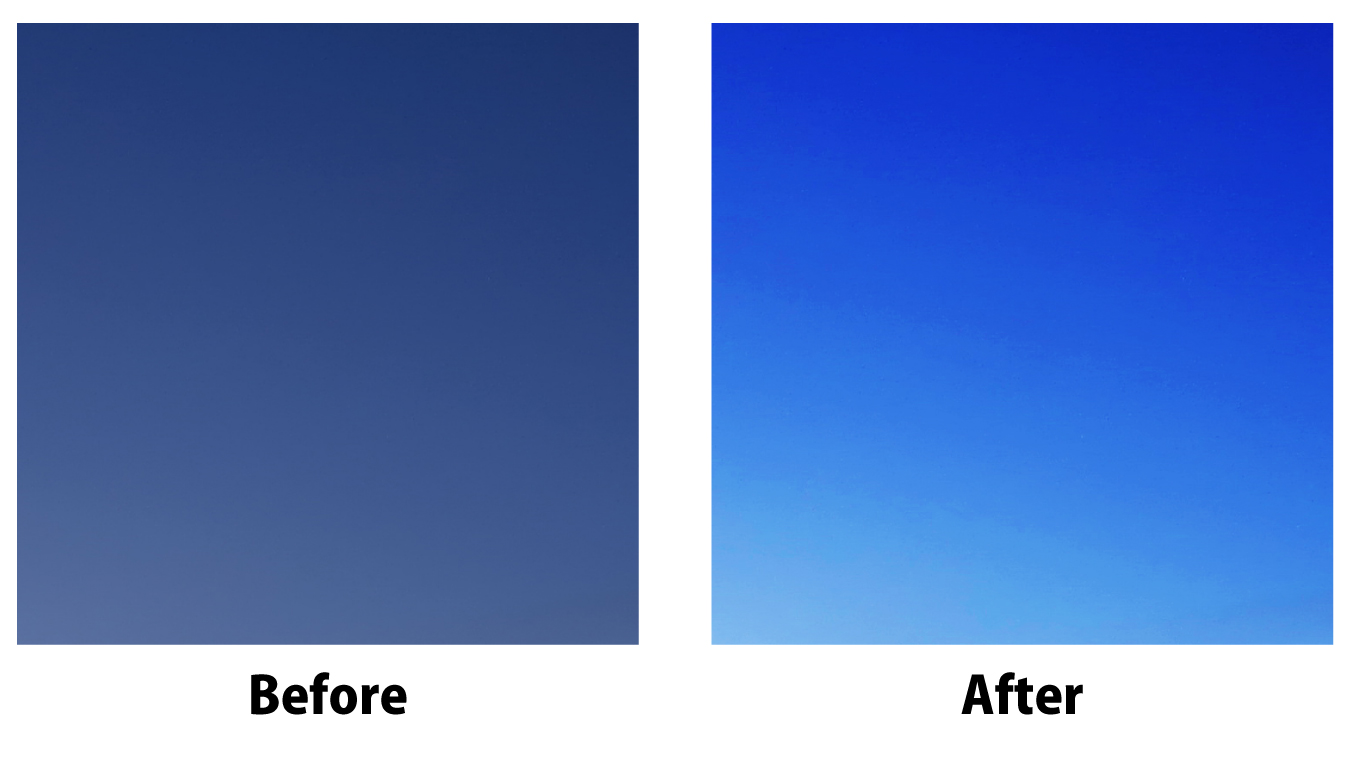 “RAW development” is a method of suppressing the deterioration of tone and image quality caused by image editing. By using RAW development, you can minimize image corruption.

As mentioned above, 8-bit image editing will result in image quality degradation due to gradation breakdown.

Therefore, in addition to JPEG, which is a common file format for image editing, some digital single-lens reflex cameras, mirrorless cameras, and high-end compact digital cameras, it is possible to record RAW files. More information about RAW files can be found here.

When an 8-bit image is edited with JPEG photo retouching (1), the image quality will be degraded. The degraded image will be saved as the adjusted image.

In RAW files + RAW development of (2), internal processing is performed in 16-bit, so the image processing can be performed with the deterioration of image quality minimized. The image is saved as an 8-bit JPEG or TIFF with no image degradation compared to when JPEG is edited with the photo retouch software.

*The number of RAW files bits recorded differs depending on the camera. As the number of information increases, image quality degradation can be minimized, so SILKYPIX processes RAW files recorded by any camera using 16-bit images suitable for image editing.

RAW development uses RAW files with more information than 8-bit, enabling both a “your image” and “image quality” to be achieved. Then, let’s look at the actual image of what kind of difference will come out. 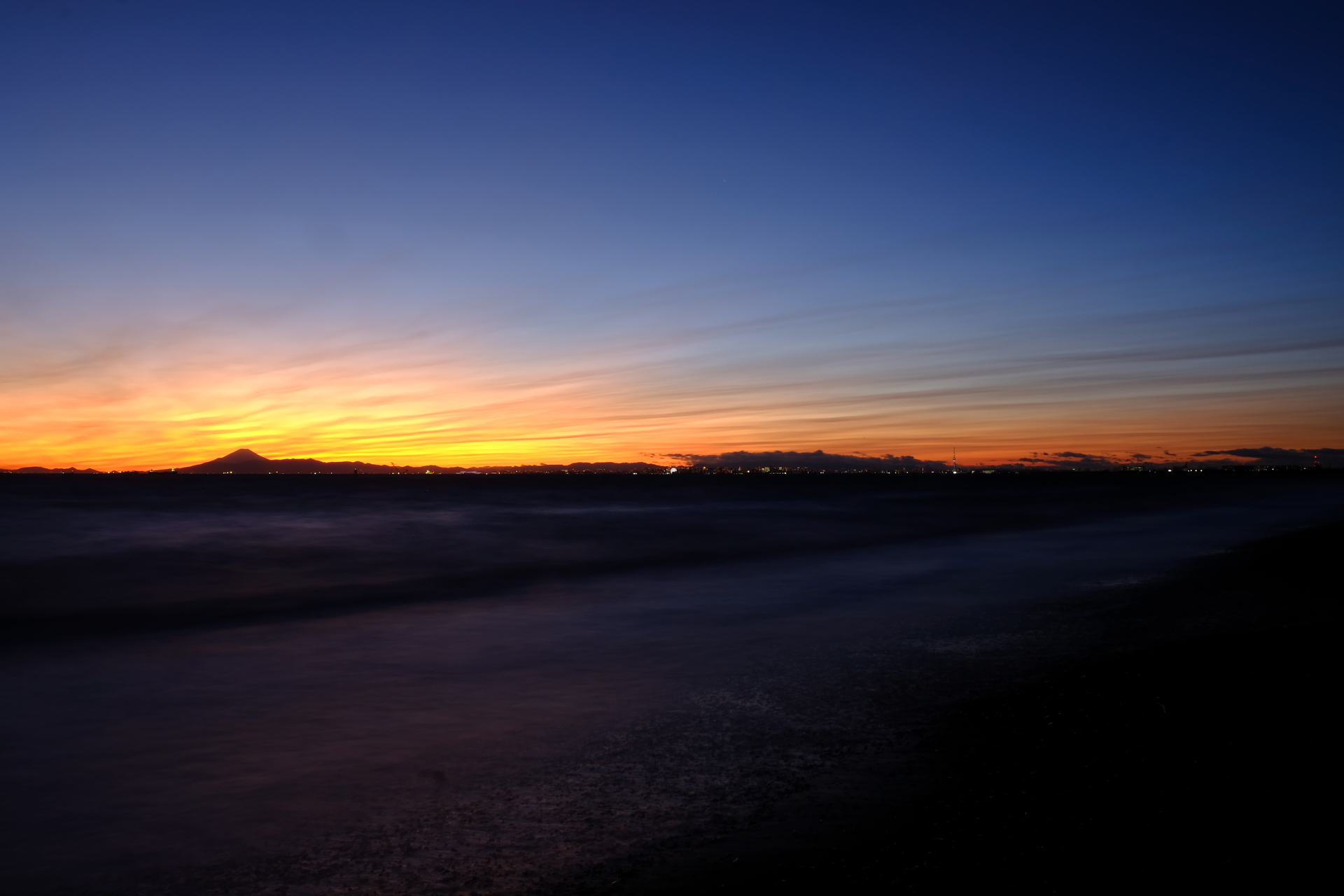 The brightness of the entire image is dark and the contrast is low, making the color appear cloudy. For this reason, we made separate adjustments to brighten the Exposure (brightness) and increase the contrast using JPEG + photo retouching software and RAW files + RAW development software and compared the connections between the gradations. 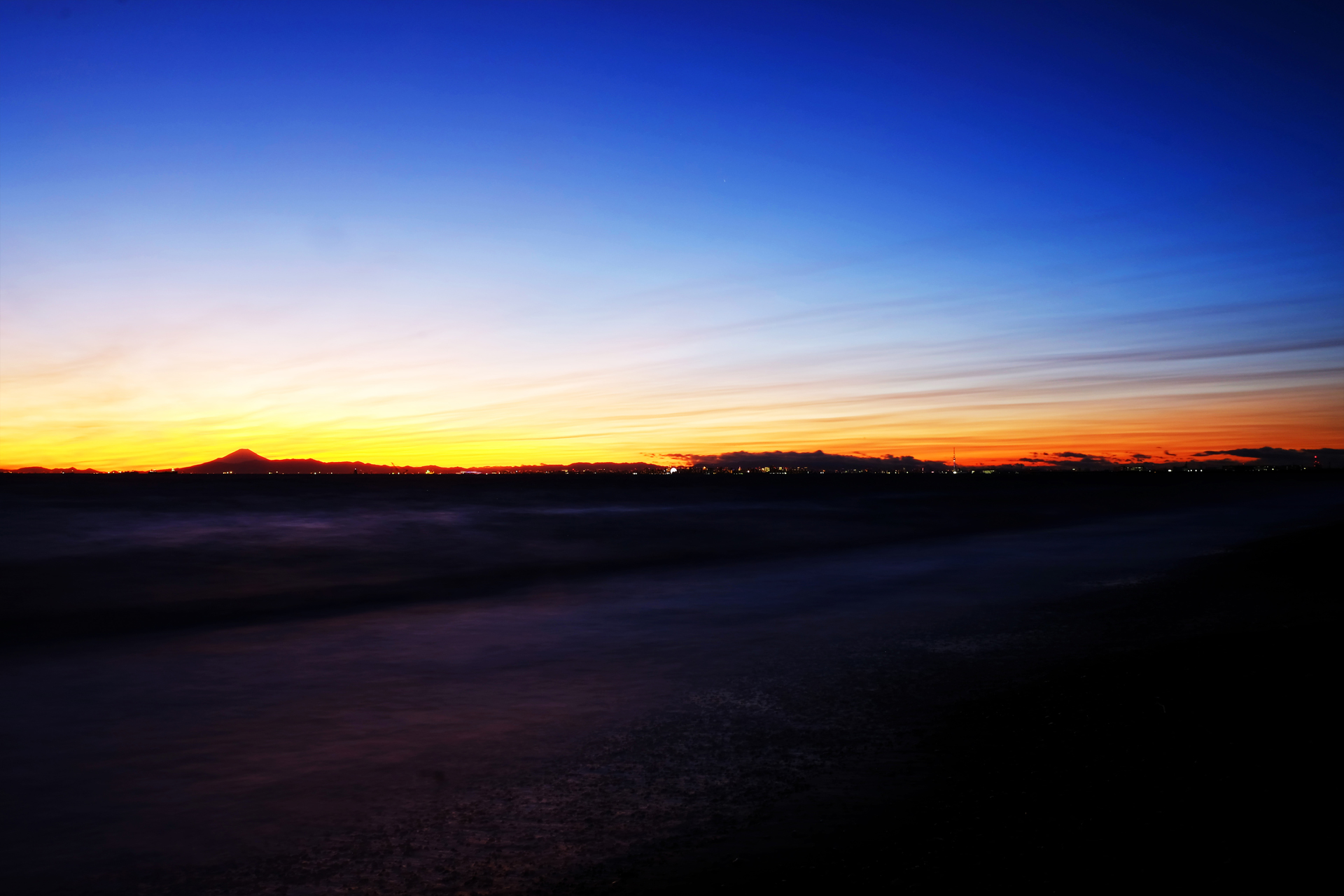 Color, brightness, etc. were able to approach the finished image. However, if you look at an empty gradient, you can see a tone jump that appears in stripes. 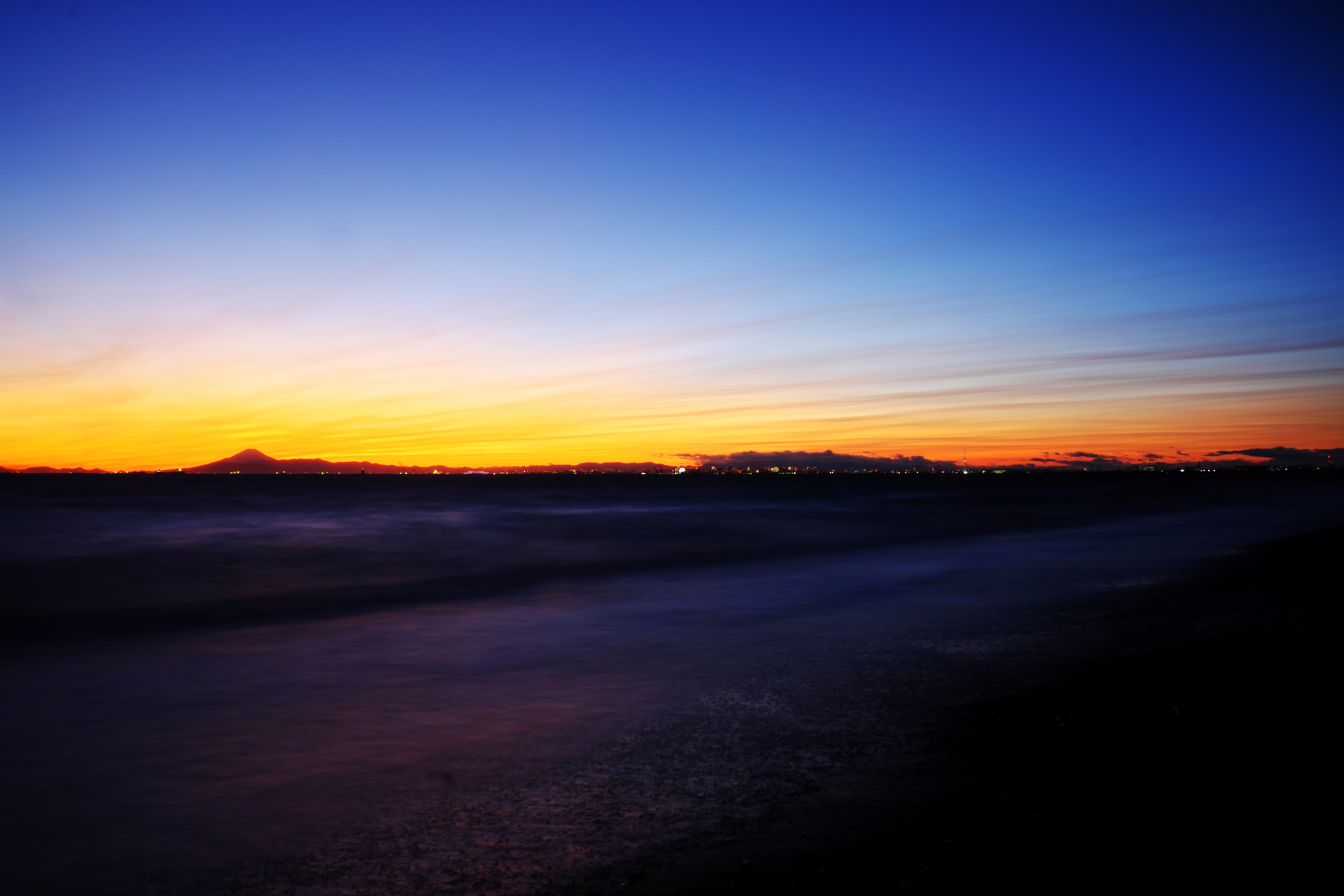 With RAW development, anyone can easily edit images without worrying about poor image quality. If you are using a camera that supports RAW shooting, why not try RAW development to create your own unique photos?