A digital camera have an “image sensor” called a CMOS or CCD that corresponds to a “film” in a film camera. An image sensor is equipped with components that convert light information captured by a lens into digital data. The RAW data is recorded directly from the light information that the image sensor captures. It is called “RAW” because it means “unprocessed”.

In JPEG mode, this RAW data is converted to JPEG by the image-processing circuits in the digital cameras. In other words, the information is skipped and recorded in a compressed state.

A digital camera is built from lenses and various electronic components. However, the principle of taking a photograph is very simple.

As shown in the illustration, the light (image) first appears through the lens of a digital camera to the image sensor. The image sensor converts this light to digital data (light intensity value). This digital data is the RAW data. This RAW data is usually converted to JPEG in a digital camera and stored in memory media. The JPEG is the images you normally see on your computer.

The RAW data records the amount of light captured by the sensor with high accuracy. By visualizing this image using the powerful computing power of the personal computer, it becomes possible to generate higher-quality images than the internal processing of the camera. The most commonly used JPEG takes advantage of the characteristics of the human eye and compresses it so that it can be made very reduce without losing its appearance. However, as long as you are compressing, you still cannot avoid losing the image quality.

As shown in the illustration below, JPEG compresses images by dividing them into fine blocks. This has the disadvantage that the image becomes a block-by-block mosaic. The tonal levels of color are also coarser than the original tonal levels that the image sensor captures, and the tonal levels are lost when you make adjustments or other operations. 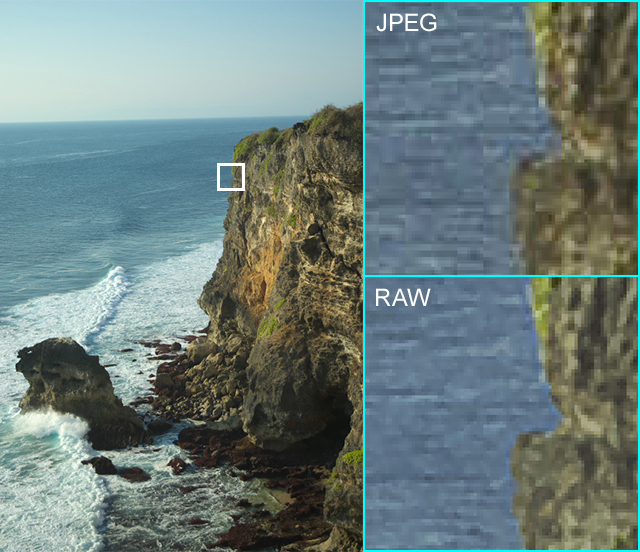 Before describing the structural of RAW data, it is necessary to briefly describe the equipment that actually turns light into data, the image sensor. The thing is, the image sensor can sense the intensity of the light, but the light cannot tell what color it is. Color is basically composed of a balance of RGB, the three primary colors of light. However, the image sensor does not understand the RGB balance, only the brightness. If the image sensor only understands brightness, how do you create colors in one piece? Even with an excellent brain, it is not possible to reproduce the correct color from data without color information.

So what happens if only R[Red] (or G[Green] or B[Blue]) light is applied to a single pixel? That’s right, the intensity of the light perceived by that pixel can be used as the value of R. Similarly, if you can measure the intensity of G and B light using different pixels, all RGB’s will be available to represent the color. So, each pixel of an actual image sensor has a color filter on the surface, similar to a cellophane, that can be perceived as RGB at each pixel.

Most of the image sensors currently in use are arranged as shown in the illustration above. These arrays are called Bayer arrays. As you can see, only one color per pixel can be taken, so you must accurately reproduce the colors from this RGB-ordered bayer to make the image human-readable. This process is the “development” process, and you can do it by using SILKYPIX Developer Studio.

Please try SILKYPIX’s high-quality RAW development.
You can download a free 30 days trial and try it out.