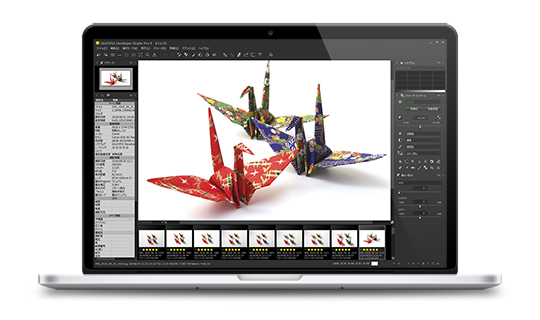 “SILKYPIX Developer Studio Pro9” is a high-quality RAW development software and the latest version of SILKYPIX series released in 2004. Main new functions include for example a “Dehaze function”, an “individual adjustment of highlight/shadow”, a “Lens profile function” and a “Blurred/Sharp periphery function”. In addition, the “Partial correction tool function” and the “Level of shadow noise reduction” are expanded. The user interface has been improved as well as operability and convenience. It became a suitable product for the 30th anniversary of the foundation of the Ichikawa Soft Laboratory.

Add the “Dehaze” slider to the adjustment item for the mist removement of hazy images caused by atmospheric moisture or vapor.

The “Highlight/Shadow” slider is mounted in the exposure adjustment item. This makes it possible to individually adjust the brightness of light and dark areas in the image. Even in scenes where subjects with dark contrasts are difficult to shoot or exposure scenes might be difficult to control, the brightness adjustment can still be fixed afterwards by individually using the “Highlight/Shadow” slider.

The “Blurred/Sharp periphery” function is added to the effect adjustment item. Using this tool, users are now able to blur the periphery of the specified range and apply sharpness. You can create a close-up effect by blurring the surroundings of the subject that is the main subject in “Blurred periphery”. You can make a good correction using “Sharp periphery”, etc. when shooting with the aperture stop value of the lens and the peripheral resolution drops.

“Curve / polygon area selection” has been added for selecting the correction area of the partial correction tool. “Curve / polygon area selection” can be set by clicking the area to be partially corrected in the image and connecting it by a curve or a straight line. That makes it very easy to select even a complicated area which used to be difficult before.
In addition, it is now possible to click “Select color to be corrected” that allows you to adjust only specific color gamut within the region as a correction target by selecting all correction regions including Circular/Gradual correction filter and brush. By utilizing “Select color to be corrected”, it became possible to select more complicated correction area, and it was also possible to easily create monochrome photographs of only a partial color.

The adjustment item of “Level of shadow noise reduction” has been added to the adjustment item of noise reduction. In the latest SILKYPIX noise reduction, processing of the latter is optimized for each of the bright and dark parts of the image in order to achieve a higher image quality. However, rarely in RAW adjustment, the noise in the dark area may be conspicuous due to the exposure correction and sharp adjustment. Side effects, for example that the entire photo may be blurred will occur if the “noise removal” is strengthened with the “Smoothness” slider. Instead of this procedure setting the “Level of shadow noise reduction” of the new function, dark noise Removal can be applied.

“Search in the thumbnail” is an easy way to search and display images by designating conditions such as file name, shooting date, comment or rating information from the specified folder.

Independent arrangement of “initialization button” instantly returning the image to the state before adjustment. Added new color to “User mark” convenient for image selection etc. Added “Open in another application” that allows you to easily transfer images from SILKYPIX to retouching software etc. New construction of “control pallet” which can arrange multiple sub-controls collectively, Items related to operability such as “Customize toolbar” have been improved.

Customer who already has following license can purchase one license for your one product license.

“SILKYPIX Developer Studio” supports 690 or more models digital cameras as a general RAW development software and has a good reputation for the quickness of support to new models. Please refer to the latest information from our web site because it may increase the number of supported digital camera models by the time.

For more information on purchase and promotion
https://shop.isl.co.jp/user_data/campaign-dsp9-launch-sales.php?lang=en

“SILKYPIX Developer Studio” is a RAW development software which develops a photograph satisfactorily with high quality image. Far using powerful computing power of PCs and let’s consider how we can get high quality image. Conventional, digital camera-specific disadvantages that had been thought to be helped are, for example, unnatural edge in the high-saturation color boundary, false color ride to the fine structure part, or noise in high-sensitivity shooting. These disadvantages were thoroughly suppressed and SILKYPIX satisfies both of the demand for high resolution and high color separation performance. We are aiming a smooth and natural photo image like a silk. This is the origin of the name of SILKYPIX.