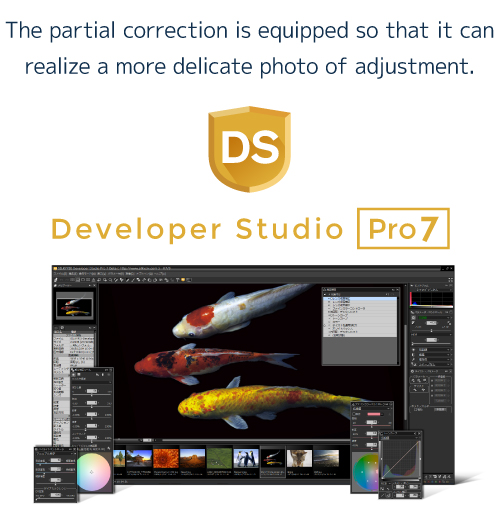 SILKYPIX Developer Studio Pro7 is the latest version software of SILKYPIX series and has been developed to pursue “Higher image quality” and “Much further fulfilling functions in order to finish the photo”. In this version by the improvement of RAW development engine “Color representation” and “Gradation” in highlight part have been improved significantly and “Natural sharp” which controls “Resolution and Blur” newly has been obtained. In addition, strongly requested from customer partial correction tool is equipped and it has become a digital developing software that strongly support customers’ photo work.

“Color representation” and “Gradation” in highlight part have been improved significantly. This achievement was bought by the improvement of RAW development engine and implemented by further deeply analyzing the information of RAW data, therefore it achieved the extension of the dynamic range in developing processing level.

You can correct partial color in the specified circle area. For example, partially if you want to change the brightness and white balance, you can easily specify the intuitive area and correct it.
You can obtain a correction that were not available in previous SILKYPIX series by designating separate areas in scenes with much overexposure or underexposure, or when light sources give off two or more different colors in the same image.

Generally, when sharpness is set strong, there is one side effect that the noise is emphasized in blurry outlines or out-of-focus part of the blur. A completely new focus plane and logic for detecting out-of-focus part have been developed for SILKYPIX Developer Studio Pro7 so that you can apply strong sharpness only on the focus point.

By correcting brightness of the tone curve with the RGB Tone Curve, colors can be reproduced with a white tinge. This is due to colors connecting to brightness during RGB processing. You can maintain colors even when changing brightness with the “L Tone Curve” installed in SILKYPIX Developer Studio Pro7’s tone curve. “L” refers to “Luminance,” and it is possible to adjust only luminance information with the L curve. Therefore, even with high-key finishing,
the subject’s tones and vividness remain. This is a convenient function for subjects who appreciate soft expressions such as in portraits.

Some of photographers may have with a rating (typically a star mark) at the selection to OK cut to the camera side of the operation on the LCD monitor during shooting. SILKYPIX allows for linking and reflecting this “Rating” set on the camera. In addition, you can also edit the “Rating” on SILKYPIX Developer Studio Pro7.

Customer who already has following license can purchase one license for your one product license.

“SILKYPIX Developer Studio” supports 551*1 different models digital cameras as a general RAW development software and has a good reputation for the quickness of support to new models. Please refer to the latest information from our web site because it may increase the number of supported digital camera models by the time.

“SILKYPIX Developer Studio” is a RAW development software which develops a photograph satisfactorily with high quality image. Far using powerful computing power of PCs and let’s consider how we can get high quality image. Conventional, digital camera-specific disadvantages that had been thought to be helped are, for example, unnatural edge in the high-saturation color boundary, false color ride to the fine structure part, or noise in high-sensitivity shooting. These disadvantages were thoroughly suppressed and SILKYPIX satisfies both of the demand for high resolution and high color separation performance. We are aiming a smooth and natural photo image like a silk. This is the origin of the name of SILKYPIX.