FILM SIMULATION
You can select “FILM SIMULATION” at RAW development in case of choosing a color representation like to select a film with some of digital cameras manufactured by FUJIFILM corporation. 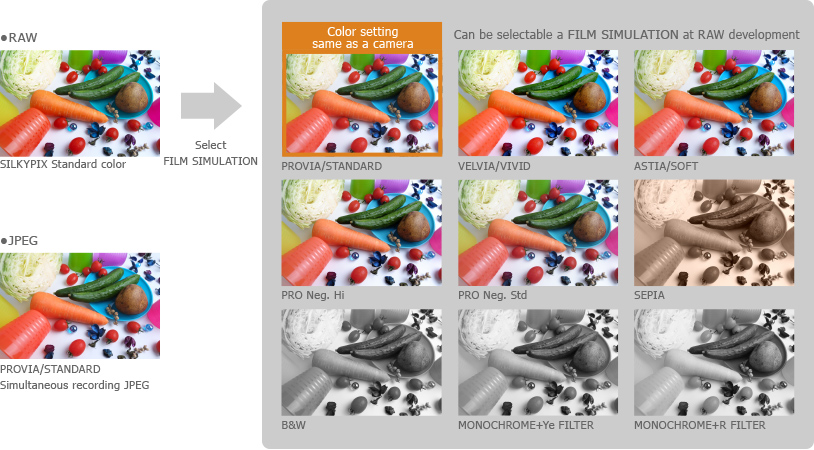 SILKYPIX supports FILM SIMULATION of FUJIFILM subsequently a Photo Style of Panasonic corporation. By these enhancement we have a high affinity with each digital cameras and expect to contribute to your making photo work more than ever.

We offer great impression and dreams to people in the world through the software.
This has been our company slogan since the company started in 1988. We are graphic software development and selling company. Especially we are focusing on three major business domains which are main consumer products such as RAW development software SILKYPIX, education software market, and outsourcing business of enterprise software market. We have significant achievements in bundled software for digital cameras and printers including overseas. Ichikawa Soft Laboratory captures users’ satisfaction by pursuing insatiable of state-of-the-art technology and quality. These are our outstanding company feature that other companies do not have.

“SILKYPIX Developer Studio series” is a RAW development software which corresponds to more than 500 different models digital camera. SILKYPIX thoroughly suppress unnatural edge in the color boundary, false color ride to the fine structure part, and color noise in high-sensitivity shooting. Also it satisfies both demand for high resolution and high color separation performance. We are aiming a smooth and natural photo image like a silk. This is the origin of the name of SIKLYPIX.